This graphical user interface (GUI) was specially developed for various projects to enable a simple unstructured grid generation and run-time view of simulated particles and flow-fields. It is based on Open GL graphic library. The currently implemented GUI features include It should be noted that all the features listed above, except reading of some initial flow and particle parameters, can be activated at runtime, i.e. without interrupting an on-going simulation. This gives an extra convenience of quick overview of the state of the simulation and saves time in initial problem setup, since no output file dumps and post-processing is necessary. It also provides a flexibility of selectively writing out most interesting results of the simulation or producing a continuous output for animation purposes. As an illustration of GUI capabilities is shown in the figures below. Figure [1a] shows a complex domain composed of pre-defined graphics primitives. Figure [1b] shows the network of bifurcating tubes related to biomedical applications. Figures [2a], [2b], [3] show screen-snapshots of particles and flow-fields produced during simulations. Fig.[2] shows the picture of colliding jets, where the particles are colored by their injection position, thereby enabling tracing of individual particles emanating from separate injection points. Fig.[2] shows a 3D vector plot of a turbulent flow-field generated with the RFG procedure together with a particle stream injected in the center of the rectangular domain. Fig.[3] shows a bubble-distribution in a ship wake, where the bubbles are colored by their "age", i.e. the time elapsed since their injection into the fluid. Figs.[4,5] show a runtime snapshot of bubble dynamics in a Rankine-vortex constructed on an unstructured grid. This GUI was implemented in an ANSI-C language and tested on PC and DEC Alpha computers under RedHat Linux 6.1 operating system. 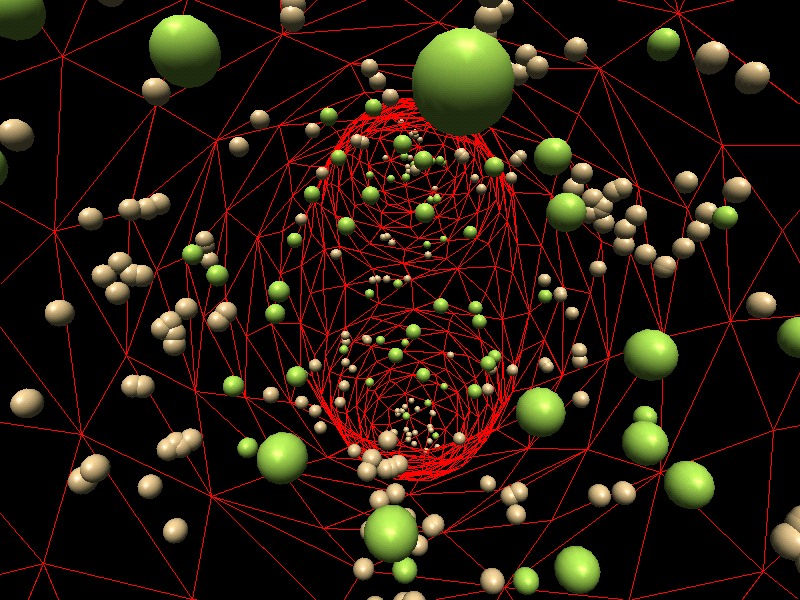 Fig.3 [Bubbles in a ship-wake]

Fig.4 [Bubbles in a Rankine vortex]